Home Articles What is a bidet toilet seat?

Given that much of the world does not use these modern toilet inventions, it’s hard to imagine what a bidet toilet seat is if one hasn’t seen one before.

While the bidet has roots in Europe tracing back to the 17th century, bidet toilet seats were invented in Japan in the 1980s by a company called Toto.  They call these bidet seats the Toto Washlet and the “washlet” has since been used to refer to electronic bidet seats, much like how Kleenex is used to refer to facial tissues.  Since they were invented they have spread to other Asian countries such as South Korea, Taiwan, and Hong Kong.  Bidet toilet seats are widespread in Japan and South Korea.

A bidet toilet seat is essentially a toilet seat with a built-in bidet.  You may have seen a traditional bidet before.  These are quite common in places such as Italy, Spain, and Portugal.  They are usually placed beside the toilet and look just like one, but function like a sink.

Bidets are mainly used to wash and clean the genital area, anus, and inner buttocks.  They were not meant to replace toilet paper, but to provide some cleanliness without having to take a full shower.

Nowadays, with the invention of the electronic toilet seat bidet, it’s possible to replace toilet paper completely as these devices have drying capabilities.

And water from the bidet function comes out from this nozzle: 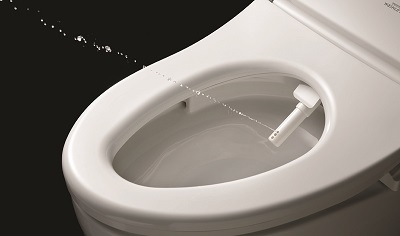 How does a bidet seat work?

After you finish using the toilet, stay seated on the toilet and activate the bidet.

To turn on the bidet function, you press a button on the control.  A bidet toilet seat is operated by either an attached control panel on the side of the seat or a remote control.

Using the control, you can adjust the temperature of the water to your liking as well as the position of the nozzle.  You can also adjust the pressure of the spray.  The nozzle extends when you activate it and retracts when you’re finished using it.

Bidet seats do more than just clean.  They typically have heated seats which make using the toilet in the winter super comfortable.  They also have air dryers so you can dry up quickly.  And to keep things sanitary, nozzles usually have automatic self-cleaning abilities that activate between toilet use.

Bidet seats are safe to use for people of all ages.  Bidet seat use is particularly high among elderly people because they don’t have to move so much when using the toilet and it’s much easier to keep clean than constantly having to take a shower.

Bidet seats also help people with medical conditions heal faster by keeping things cleaner.  In fact, bidet seats were inspired by cleansing medical devices that people were using.  They are a significant improvement to those devices that sprayed water at unpredictable temperatures and angles.

We hope this has been a helpful introduction to bidet toilet seats.  If you would like to purchase one to try out in your home, check out our carefully-selected recommendations below.  If you have any questions for us about bidet seats in general, let us know below as well!